Out in the Cold: Why Creative and Healing Space Should be Inclusive to Those Who Identify as Men

When I left academia in 2016 to ghostwrite a book for a successful entrepreneur, a vision came over me to start my own creativity coaching business. Building on 25 years of writing, 20 years of program management, and 16 years of teaching college writing, I had a nebulous, but intense, idea to create safe and enlightening space for people to tap into their creative forces; find their voice, discover their purpose; and unleash their personal power through creative play, self-exploration, and connecting to community. I knew that through expression people find deep healing, and by healing emotional wounds and shedding harmful paradigms people can fully express themselves. I also knew that I didn’t want to do it alone; I knew that strength would come if I de-centered myself as the only facilitator of events and individual coaching. I reached out into the community of artists, healers, and teachers to create meaningful programming in West Michigan, and what unfolded was a startling series of discoveries and self-discoveries—the most salient was that of gender exclusion in the healing and creative arts...

After the book was completed and in the hands of a New York editor, I had time to toss around ideas for important questions for this venture: Who would it serve? What would we do to create magic in their lives? What venues and outdoor locations would foster the most connection to inner guidance and nature? One day, as the answers were floating around in the ether, I was driving to pick up my son from school when suddenly the word “Shamama” popped into my head. It intrigued me so much that I had to pull over to look up the meaning of this word, which, to the best of my knowledge, I had never encountered. It is the name of the “Queen Mother”—or the only female incarnation of—Buddha. (It is also a type of Persian perfume and a beautiful Arabic female name.) I liked the sheer sound of the word and thought it a fitting name for my business—after all, we could all stand to embrace the feminine side of our spirit and psyche.

I knew that nothing quite like Shamama existed in West Michigan. There was no other place where creative arts, healing arts, and community intersected. Sure, there are writers groups and energy healers, book clubs and religious groups, art classes and community organizations, but nowhere could I find one central organization that celebrated healing in arts and personal expression as well as the expressive and artistic aspects of healing.

The first thing I realized after launching this business was that cisgender heterosexual women disproportionately were attending our events and far outnumbered people of other genders, sexual orientations, and gender non-comforming identities in their seeking out of healing modalities and personal expression. My attendance statistics bear out my anecdotal observation: a full 95% of participants in Shamama’s programming (such as intuitive collaging, shamanic journey writing, mandala-making, drumming circles, shamanic journey walks, retreats, and breathwork sessions) are cisgender women—although I am unsure of their sexual orientation as I don’t keep that data. Coming from academia where there exists parity in gender on campus, this was startling to me, and as a cisgender pansexual woman who is married to a man and is a mother to three boys (one who identifies as bi-sexual and gender fluid), the lack of diversity truly concerned me. I was careful to include images all types of people in my marketing efforts, used inclusive language, and created programming which I thought would appeal to everyone. So, why aren’t men and those on the spectrum of gender identity and sexual orientation seeking out these spaces where they can grow and heal in non-traditional ways? Do they not feel safe? Is it not attractive to them? Are they not aware these opportunities exist? Have they gotten a message somewhere that they are not included in these beautiful, healing endeavors? Was it (gasp!) the name Shamama?

As I became further immersed in my new world, I became aware that the healing and creative arts communities are, in fact, inundated with exclusive women’s programming. Most notably, there are “women’s circles”: writing circles, dance circles, talking circles, prayer circles, drumming circles, fiber-arts circles, meditation circles, energy-healing circles, new moon circles, full moon circles—so many, many circles of women embracing the non-linear and non-hierarchical to create non-institutionalized, recurrent gatherings of which the objective is to be among others in safe space to connect, create, communicate, celebrate, and otherwise experience their lives through the lens of the feminine. Between all-female knitting clubs, “wine and paint” nights, book clubs, fiber guilds, new mother meetups, crone clubs, and women’s only yoga, there certainly is no shortage of offerings for women to connect and transform. But, where is the space for men and gender non-conforming people to expand their horizons, fully express themselves, and connect with others in meaningful ways?

Don’t get me wrong, I am joyfully a member of two local communities of women: a full moon gathering of beautiful souls on the spectrum of sexual orientation, ages, professions and backgrounds who have expanded my world and shared the heartache and triumphs of our lives—and a neighborhood wine and dinner club that is more focused on socializing and tips for travel and entertaining than deepening our relationship to the earth and the cosmos. Both are lovely, both are lights in my life, both are exclusive to women.

I certainly hold no animus to those in the healing arts and artistic expression communities who cater only to women and even purposefully exclude certain people in their programming. I count about 30 local women’s-only organizations and “circles” that I have been invited to in the past four years or so, and I am quite certain they hold important space for their female members. But, why are they so darn exclusive?

Many say that these types of organizations are imperative because women need safe space to explore outside of the male gaze. One leader of a women’s circle, Robyn Lee, who contemplated the idea of including men, put it this way: "In my experience men in a women’s circle change the dynamic in groups—women act differently. We become caretakers, it appeals to our mating instincts. It’s simply nature! Already by considering his request seriously, [we are demonstrating a] beautiful caretaking quality of us women. And then to take a technical POV, it’s a ‘women’s circle’, not a ‘feminine circle’. Then the first thought that came to mind was to offer to mentor him to start his own circle with other men who also feel the Divine Feminine awakening in them. I imagine you’d both receive so much from embarking on a journey like that. This makes me wonder how to handle for those who identify as gender neutral. Again I suppose it would be what they identified with…Love the creative expression of the feminine!!” (Global Sisterhood).

And another circle leader, Donna Clara, notes: “A women’s circle strengthens the way women deal with each other. Just because women’s circles don’t invite men into their circle doesn’t mean they don’t include men in their hearts. It doesn’t mean that we as women are not in peace with men. It is more that many women feel hurt, are suspicious, are envious and jealous and feel a lot of resistance towards other women. In a women’s circle these wounds can heal because women learn to open themselves without being afraid for being criticized immediately. She can start to trust other women again, find out where her borders are, learns to say NO, stops being a pleaser without feeling guilty and learn that it is not only about being beautiful on the outside or about performance, but that it is about her with all that she is. She deeply experiences how nourishing women actually can be! See, these circles are to become whole again, to find love for other women again, to heal from their wounds as a mother’s daughter whose needs were not seen, heard, or fulfilled. Pure sisterhood is a powerful tool to heal the world, to heal humanity, to heal the incessant power struggle between genders.” (Global Sisterhood).

It seems a “divine feminine awakening” and “powerful” sisterhoods are emerging across the world—and this is beautiful—but I maintain that we are leaving men and gender non-conforming people out in the cold. Do they not deserve safe space to explore, connect, and express? Yes, yes they do.

I maintain that we all grow exponentially by challenging our social conditioning (e.g. “caretakers” who are afraid of “being criticized”) and transcending societal expectations (e.g. gender expression and gender roles) to be present in authentic ways. There is no doubt that in the Shamama community we all enjoy shedding our inauthentic, culturally-informed selves to commune in genuine and meaningful ways.

By abandoning binary paradigms, we embrace a world in which all people feel comfortable participating. I can scarcely imagine how limited our transactions and creativity would be if we weren’t inclusive to all. At Shamama events we use unconventional methods (drumming, laughter yoga, forest bathing, “journey writing”, breathwork, etc.) to crack open our world in ways that challenge our habits, perceptions, societal roles, and creative abilities. We find new strength and belief in our own power and what we are capable of accomplishing creatively and personally. If we are cracking the world open, then let’s really do this—even in the presence of people who might—at the first blush—make us uncomfortable. Perhaps it is in the discomfort that we will truly grow. When we create space that is safe, it is safe for all. And it is when we feel safe with all people that we will truly transcend our limitations.

So, I ask you to imagine an artistic and personal awakening that is neither feminine nor masculine, but simply divine! Pick up a pen, a paintbrush, or a drum! You are welcome at Shamama exactly as you are!

Can of Worms: Advice for Untangling Memories in the Personal Narrative Process

Walking in the Pain: Confessions of a Reluctant Creativity Coach

"Hate to rain on your parade, but…”

"My Son is Sick" and Other Lies I Told: How Emotions Get the Better of Us in the Creative Process

VLOG: "Creativity requires the courage to let go of certainties" 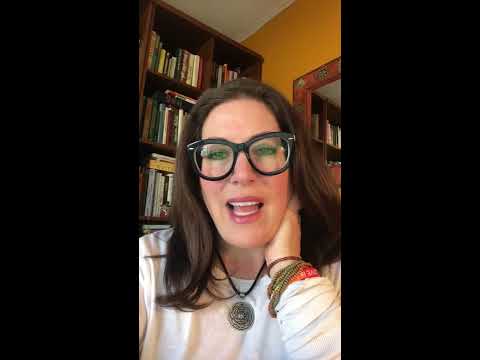